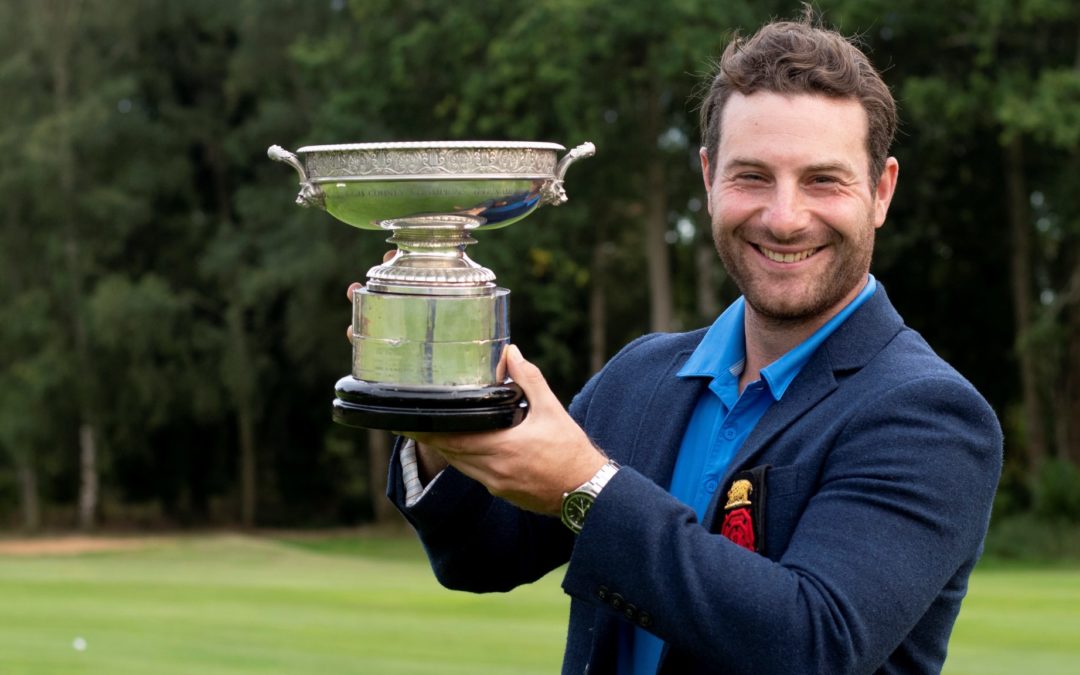 The former EuroPro Tour player from Hayling Golf Club, completed a club, county and country treble by landing the national title – which had eluded the Hamsphire, Isle of Wight and Channel Islands Amateur Champion for 57 years.

Burden was playing with McGoldrick over Frilford Heath’s Red Course, in Oxfordshire, and it was no surprise that the 32-year-old – who won his first Sloane Stanley Challenge Trophy at Aldershot’s Army GC, in June – should win the play-off .

Toby has probably played more rounds on Frilford’s Red Course than any other – apart from Hayling – the Red Course has been used by both the EuroPro Tour and as a first stage venue for the European Tour Qualifying School.

The top two tied on four-under after two rounds, with Burden carding two rounds of 70, and McGoldrick, firing an excellent 68 – the only player to break 70 all day.

They made the short walk from the 18th to the ninth tee, a tricky par three with water in front and trouble behind the narrow green.

And when McGoldrick’s six-iron on the 186-yard hole went long, leaving him with a tricky fast chip, the Hampshire champion eased a seven-iron to some 20 feet.

The Somerset ace left his second some two-and-a-half feet from the hole, while Burden eased his first putt to within three feet – but with a downhiller breaking from left to right remaining.

Burden holed out and then watched as McGoldrick’s ball broke from right to left and then lipped out, to hand Burden the crown.

Toby, who also won the Hayling Club Championship in June, said: “To find out I was the first-ever Hampshire player since 1962 to win that trophy it was incredible feeling and rounds of a perfect year.

“When you see the names of Sir Nick Faldo, Sandy Lyle, Lee Westwood and Tommy Fleetwood on that trophy – and think of the great Hampshire champions like Martin Young, Kevin Weeks and Hayling’s Matt Blackey, who all had more than one attempt to win it – that is great stat to have under my belt.”

Burden had made the most inauspicious of starts dropping two shots in his first two holes before back-to-back birdies at the fifth and sixth steadied the ship.

A mistake cost him a bogey four at the par three ninth after he misclubbed and failed to find the putting surface, but bounced back immediately with a birdie four at the 10th, again leaving himself with just two feet thanks to his wedge play.

Burden’s day got better as he moved into the red for the first time with a birdie three at the 15th sinking a putt that broke from left to right from eight feet.

And again, one birdie was quickly followed by another – as his wedge approach went past the pin to nine feet, before finding the bottom of the cup.

Burden found he was in a five-way tie for the lead at lunch, sat alongside Yorkshire’s England international David Hague – who was in the original Walker Cup squad named in April – Sussex’s George Goddard, Warwickshire’s Joe MacIlwraith and Surrey’s David Corben.

McGoldrick was two shots back but made one of those shots with two birdies in the first four, although he started with a six at the par five second, as Burden reeled off six pars in a row.

A five at the seventh drew the Somerset champion level after Toby found himself stymied behind an old tree and failed to get up and down.

McGoldrick made a mistake at the ninth to fall back to one behind, but then produced a run of three birdies in five holes to move into the lead.

Burden needed to match McGoldrick’s birdie from 12 feet at the 12th to avoid going behind after they both hit great approaches – the Hampshire champ followed him in from 10 feet.

The Hampshire first-team member then watched his 20-foot putt lip out on the 13th. only for his playing partner to go in front again with a birdie at the 14th.

Burden realised he needed to make his move quickly after just a par at the next. He ripped a two-iron down the 16th before hitting his wedge to some 15 feet. 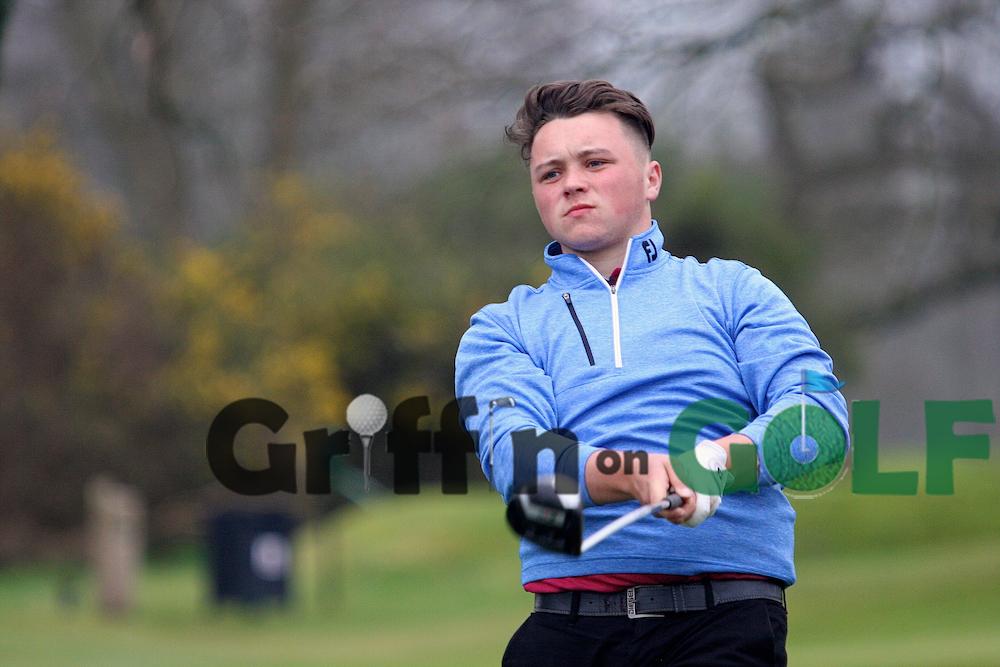 But McGoldrick again holed his birdie putt going first from three feet further from the pin to briefly extend the lead to two, only for Burden’s flat-stick to come good with a three of his own.

Another arrow-like two-iron put Burden in with a chance to close the gap again on the 17th. But his gap wedge settled 20 feet away from the hole, with Jake just a couple of feet closer.

This time Burden made his birdie putting first, having had a similar line in the morning, while McGoldrick crucially missed to leave them tied on 140 after they both parred the last – having played the back nine in three and four-under respectively.

The other halfway leaders were all playing behind them – with three in the last two groups.

Corben had reached the turn in three-over while Hague took six at the eighth to fall one back, while the MacIlwraith matched par to stay in the lead with nine to play as Goddard also took one more than par over the front nine.

Goddard then made a bogey five at 15 to drop three shots back, while McIlwraith could only finish with eight straight pars to come up a shot shy.

A double bogey six at the 14th ended Corben’s claims to become only the second-ever Surrey winner – and the first since Peter Benka in 1967 – leaving Hague needing three birdies in the last three holes after dropping a shot at 15.

The England man made his second three of the day at the 16th but two pars meant the clubhouse leaders would head to the ninth for the play-off.

Burden said: “When I came in with two-under at lunch, I expected someone to shoot three-under and lead.

“I spoke to my dad after nine holes in the second round and we thought four or five-under would win it, so I knew I had to push on really when Jake went two in front.”