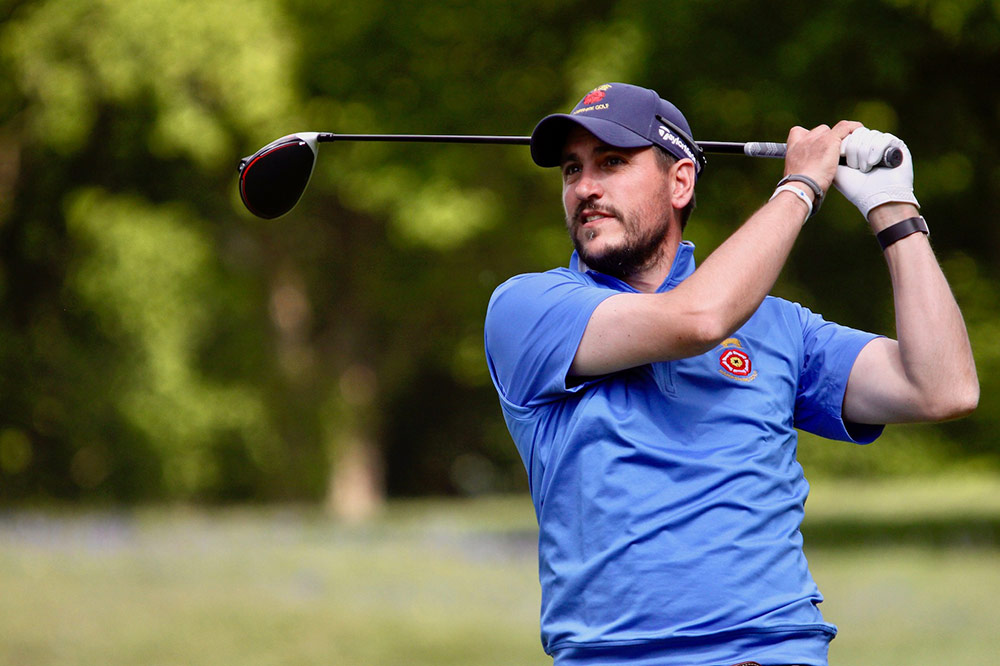 HAMPSHIRE made it two wins out of two in the South East League South Division after an 8-4 win over Kent at Redlibbets, close to the Brands Hatch motor racing circuit.

Any fears Hampshire would miss Billy McKenzie at the top of the order while the Rowlands Castle England squad player was playing in the French Amateur Strokeplay were quickly dismissed as Colin Roope’s men whitewashed the hosts in the morning foursomes after hitting top gear.

While they were closing out their match when two up after 17, reigning Stoneham’s Hampshire, Isle of Wight and Channel Islands Amateur Champion Owen Grimes and Jordan Sundborg, from Shanklin & Sandown, romped to a 5&4 win over Josh Bristow and Jamie Guppy.

Ed Richardson was another former England international playing on his home course for Kent, having survived a brush with death more than 10 years ago after being diagnosed with a rare blood disorder.

But the Stoneham pairing of Ryan Moody and Alex Talbot were four up with three to play to make sure Roope’s appetite for lunch was not spoiled by any late fightbacks.

That left George Saunders, returning from his fine first season in US college golf – he has been ranked No. 3 in the National Junior Collegiate Athletic Association rankings playing for Texas Midland – to help Rowlands Tom Robson, back from injury, win on the last against Mason Essam and Ben Quinney.

Roope, who has identified Hampshire’s past foursomes record as being the area where the county could improve the most since taking over at the start of 2018, was delighted to win the morning session 4-0.

Roope said: “We arrived at Redlibbets on Saturday and even though we only played 12 holes, Alex Talbot and Ryan Moody had played a round there on Friday so we knew what to expect.

“It was a tight, fiddly course and with the wind on Sunday, we knew it was not going to yield a lot of birdies. So we played for par and let them make the mistakes – and our strategy worked perfectly.”

Having digested his lunch though, there were still some uncomfortable moments before the points were secured.

Kent came out with nothing to lose and over the first seven holes, they had the upper hand in five of those eight singles games.

While Wright was playing at the top of the order, Saunders was paired with Richardson, the 2012 Hong Amateur Champion in the third match.

Last year’s West of England Amateur Champion did very well to beat the son of former England cricketer Peter Richardson, 2&1 – his opponent may be nearer 50 while Saunders is not even half his age – but it proved the winning point.

Wright closed out a two-hole win when Sherreard lost his drive on the last while Young was four up on Quinney with three to play in match five, meaning Saunders claimed the crucial seventh point.

Although Sundborg and Grimes were both beaten 3&2 by Burns and Guppy respectively, Talbot held out to win by one against Panting.

Clubmate Moody was last man out and even though Bristow’s win by the same margin ensured Kent had halved the session, Roope’s side’s second win in a month sets up next month’s home clash with Sussex.

Back-to-back South Division wins remain on course for the first time since 2002, when Hampshire also completed a hat-trick of successes in the South East League Finals to claim the Daily Telegraph Salver for a third-year running.

Picture: Brokenhurst Manor’s Martin Young helped Darren Wright to a point at the top of the foursomes order against Kent at Redlibbetts on Sunday. By ANDREW GRIFFIN / AMG PICTURES