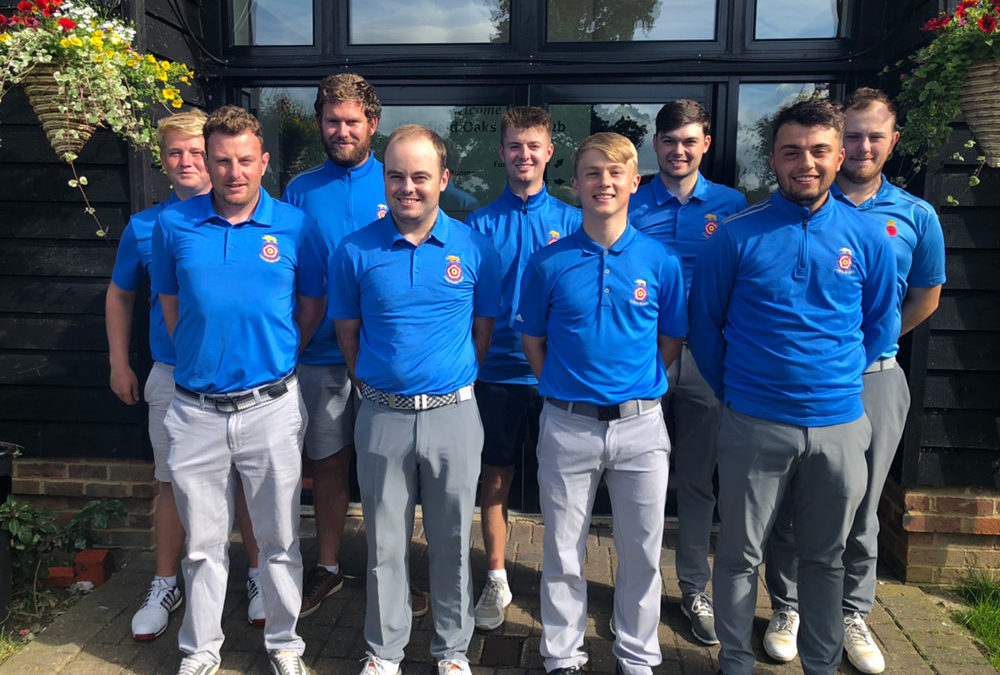 HAMPSHIRE Colts roared back from an early deficit to get new manager Nat Riddett’s managerial reign off to winning start with a 71/2-41/2 win against Surrey, at Sherfield Oaks.

The Shanklin & Sandown greenkeeper watched his players struggle in the morning foursomes as the Crown Golf course gobbled up any wayward drives thanks to some brutal rough, against a Surrey side featuring Killian McGinley – the son of Ryder Cup-winning captain Paul, who are both members at Sunningdale.

Having been able to select a strong side, including three players who have featured for Hampshire captain Colin Roope’s first team this season, the hosts found themselves trailing by a point at lunch in the first of two South Division matches this summer.

The Stoneham pairing of Alex Talbot and Owen Grimes gave Riddett the perfect start coming from behind to win a point with a 3&2 win over Scott Murray and Kevin Lee.

Hampshire were quickly five down in the bottom match where Stoneham’s Callum Watson – who finished a golf scholarship at Erskine College, in South Carolina in April – was a last-minute replacement for Liphook’s Sam Lemon.

Watson and clubmate Lawrence Cherry were left to an early lunch by the Surrey pairing of McGinley and Charlie Crockett, whose dad Simon has captained Surrey recently and played in the same county side as Paul Casey 20 years ago.

Osborne’s Chris Hayward – playing with La Moye’s Jason Stokes – were four down against the visitors’ Ben Stokoe and Lawrence Courtney to put Riddett’s side on the back foot.

And in the last match out La Moye’s Jo Hacker and Blackmoor’s Sam Parsons were hit by a late birdie after Surrey’s Tommy Bentley and Sam Wood put their tee shot on the 18th green to come from two down for a half.

Riddett need not have let the score spoil his lunch as his U23 side came firing out of the blocks and after six holes they were comfortably in front in the first six games.

Talbot rattled off a 7&6 win over Lee – driving the green on the 12th to eight feet for another birdie – while Parsons, fresh from his win at the Bren Gun Cup at Aldershot’s Army Golf Club 24 hours earlier, saw off Stokoe, winning by the same score.

That put the home side in front and Hacker and Grimes were in a race to join the top two out on the course supporting their team-mates.

That gave Stokes the chance to claim the first point under Riddett’s regime, by beating Sam Wood, 5&4, before Hayward put some gloss on the scoreline beating Courtney 3&2 for a full point on his Colts debut.

Not even late defeats for Watson – at the hands of McGinley – and Cherry who was picked off by Crockett could spoil the new manager’s day.

A delighted Natt said: “We have got off to a fantastic start even if the foursomes was a struggle. All the players battled hard under tough conditions. I was pleasantly surprised waiting at the sixth hole in the singles to find we were up by at least a couple of holes in the top six games.

“By the time Surrey won their first point in the singles, we had got to seven-and-a-half, guaranteeing us the win. Callum Watson helped us out by answering a late call after Sam Lemon twisted his ankle on the Saturday – and got to play Paul McGinley’s son twice.”

Riddett’s team will now travel to West Kent on July 21 with a place in the South East League Final at stake. Hampshire are hosting the final at Basingstoke’s Weybrook Park, on October 13.