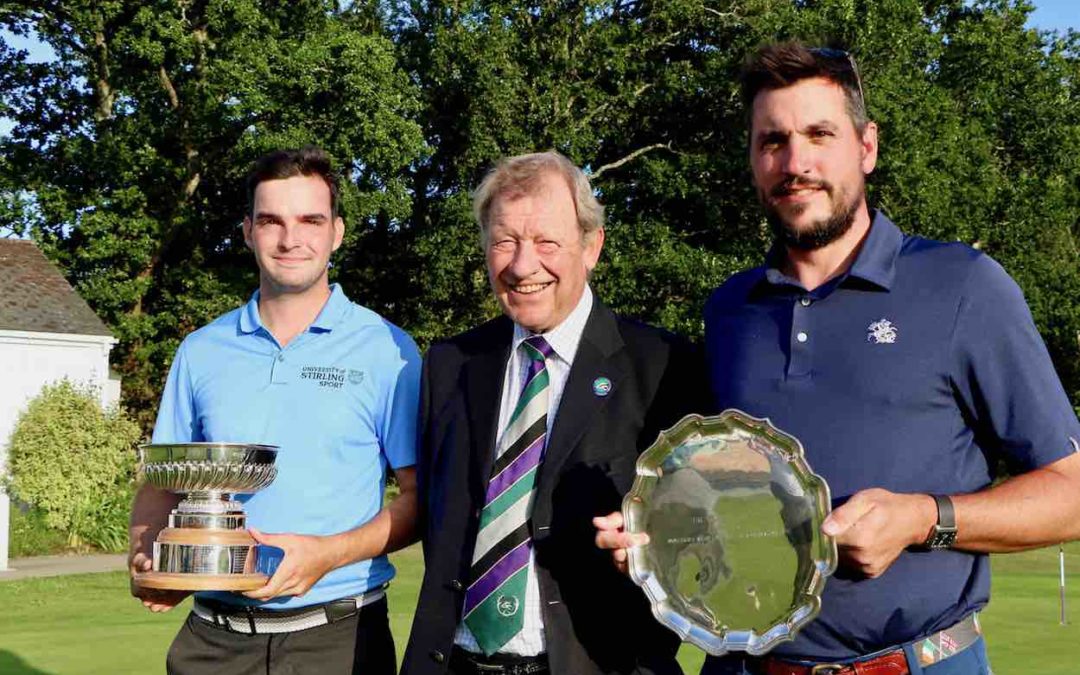 SHANKLIN and Sandown’s European Universities and Colleges champion Jordan Sundborg has added another first to his growing golf CV – by completing a career Solent Slam.

In 2016 he was the first Isle of Wight player to win the Stoneham Trophy at the Southampton club, which is rated as one of the top heathland courses in the South.

A year later he became the first player from the island to win the Solent Salver – for the best score in both the Stoneham Trophy and the Mike Smith Memorial at Brokenhurst GC.

On Sunday, Sundborg set about denying former Hampshire captain Martin Young a Solent Slam over the weekend after the Brokenhurst veteran won the 2019 Stoneham Trophy with a stunning display of ball-striking.

And by the early evening, the Stirling University student, who is the UK and European No. 1 in higher education golf, was in possession of the trophy donated in memory of one of the county’s most talented teenagers.

Smith was cruelly killed in a car accident two years after he won the 1989 Hampshire, Isle of Wight and Channel Islands Amateur Championship at Shanklin & Sandown.

Young was everyone’s favourite to complete a second Solent Slam in one weekend – after his three victories in 2005, a feat matched a year ago by Rowlands Castle’s Tom Robson.

In fact, only five players have completed the Solent Slam in the same weekend over the past 26 years – and Young was all set to become the first to do it twice until disaster struck on his final hole with a treble bogey seven.

Sundborg battled bravely all afternoon to win at the death, even though he had been three shots behind surprise lunchtime leader Lewis Scott from Lee-on-the-Solent, who produced an excellent 69 to top the leaderboard on one-under.

After six bogeys and four birdies in an opening two-over par 72, Sundborg looked to have taken himself out of the tournament with a double bogey seven at the par five second.

But he produced some stellar golf over the next 14 holes as he chased down Young, who was a shot ahead of him at lunch.

He got one shot back at the at the fifth but gave it straight back with a bogey five at the next. Playing partner Young had eased ahead with two birdies in his first seven holes.

That sparked the Shanklin star into action with two threes at the eighth and nine to get back to level par, but another shot went at the par three 10th.

Drama at the last with Young’s triple bogey

Luckily, Young matched that with back-to-back bogeys around the turn to leave the 49-year-old – with five Mike Smith Memorials to his name – in front on level par with nine to play.

Playing two groups ahead, Scott got to the turn in two-over to trail Young by a shot, before bogeys at the 10th and 12th sandwiched a costly six at the 11th – that left him five back.

A two at the 12th got Sundborg moving back in the right direction again, but he made his third bogey at the next to trail Young by three shots.

The short 14th proved the turning point as he drove the green of the 296-yard hole and sunk his 30-foot putt for a two, to wipe out Young’s birdies at 11 and 12 as he could only make four.

Sundborg applied the pressure with birdies at the driveable 15th and the par five 16th, but a three on the short hole had left Young one clear with three to play.

Ironically, it was the 18th, where Sundborg took six in the 2015 county championship when leading the strokeplay qualifier, that gave the 2017 Hampshire, Isle of Wight and Channel Island Amateur Champion the trophy.

Young drove out of bounds at the 334-yard hole and ended up taking seven after missing the green with his fourth.

Sundborg – who crucially had the honour on the tee – made sure of his par four after driving the green, to finish two clear after a three-shot swing, having played his last 11 holes in five-under par.

A delighted Sundborg, who revealed work on his swing back in May to improve his long game had paid off, said: “It’s been a great year and Sunday was my fifth win of the season and it’s not even over yet.

“So I’m looking forward to kicking on next year with some hard work on my swing over the winter.”

Scott, who eagled the 14th and picked up a birdie at the 16th, finished three shots back on two-over, edged out of third by an excellent 68 from Stoneham’s Ryan Henley – one of four players to have won the Mike Smith twice in its 29-year history.

The former English Mid-Amateur Champion took the 72-hole prize for a sixth time in the last 20 years since his first win back in 2000 – and his first since 2013 – with a total of six-under par.