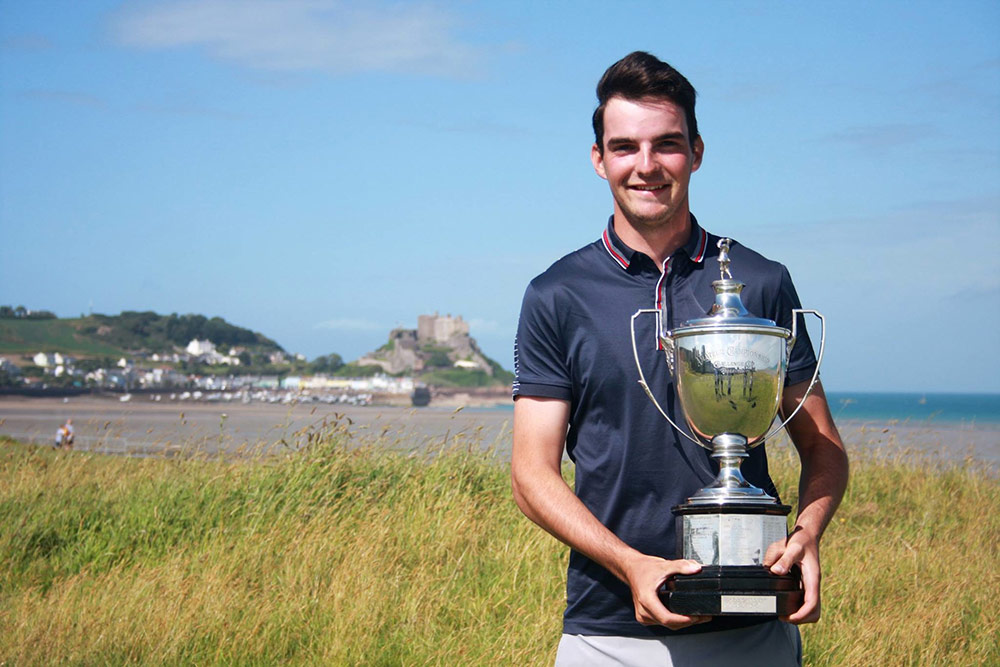 SHANKLIN and Sandown’s Jordan Sundborg has the chance to become the most successful Isle of Wight golfer some 90 years at the county championship this weekend.

The Stirling University student who claimed the British Universities and Colleges Sport’s Order of Merit back in March, will tee it up at Aldershot’s Army GC, on Friday, aiming to repeat his success of 2017 by winning the Hampshire, Isle of Wight and Channel Islands Amateur Championship for a second time.

He has been in good form for Hampshire, helping them beat Dorset 1011/2-11/2 at Brokenhurst Manor in mid-May, and then seeing off Kent in an 8-4 win away from home over the Whitsun weekend.

Two years ago he travelled to Jersey to become the first Isle of Wight player to win the Sloane Stanley Challenge Cup in 78 years – since J R Mellor in 1939 – shortly before the outbreak of World War II.

Only three players from Shanklin and Sandown have won the Hampshire IoW & CI Amateur Championship in its 113-year history, including Mellor and Sundborg.

The 66-strong field start with 36-holes of strokeplay on Friday, with the top 16 qualifiers in the seeded knockout draw battling it out to reach Sunday’s 18-hole final.

And Sundborg will have some inter-club and island rivalry to contend with as clubmate Conor Richards – fresh from finishing fifth with Miami-based Barry University at the NCAA Div II Finals – also looking to get his hands on the trophy.

Richards, who won the Hampshire Boys title in 2015, reached the quarter-finals two years ago in the Channel Islands, but missed out on a place in the last 16 by a shot 12 months ago.

Having beaten the then county captain Martin Young in the final at Royal Jersey, Sundborg was beaten in the quarter-finals at Liphook 12 months ago by Romsey’s Owen Grimes, in one of the shocks of the championship.

Having come back from three down to beat the defending champion at the first extra hole, Grimes went on to win in the final aged just 19, beating Tom Robson, from Rowlands Castle.

It was 70 years ago this month that 17-year-old Paddy Hine became the youngest ever winner in the championship’s history – a record that still stands today.

He also won the English Men’s and Boys Amateur Strokeplay titles that summer – and is still the only player to have won the Brabazon and Carris Trophies respectfully in the same season, although Sandy Lyle broke his record for the men’s version in 1975.

While Sundborg is something of a veteran at the age of 21, he still has some way to go to match the achievements of Squadron Leader C H Hayward, who won the county championship four times in eight years between 1922 and 1929, including three final wins in the first four years of that remarkable run.