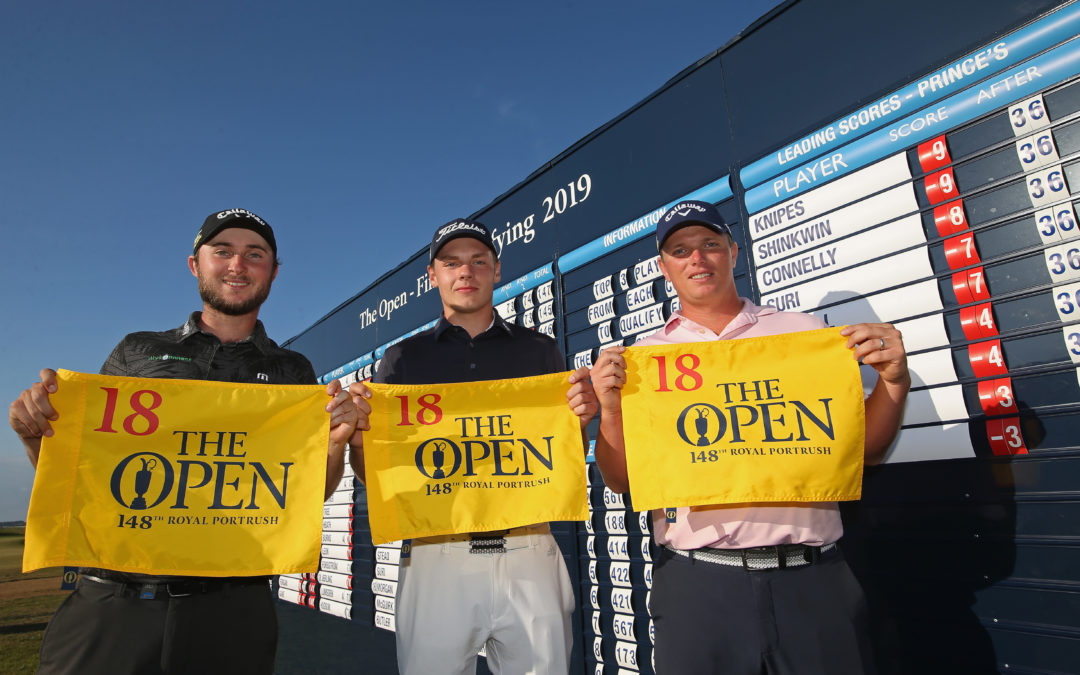 CHELMSFORD teenager Curtis Knipes enjoyed the day of his golfing life to qualify for The 148th Open at Royal Portrush at his first attempt.

Twelve players from a starting field of 288 at four venues across the country qualified for golf’s original championship through Final Qualifying as part of The Open Qualifying Series.

The England Boys international Knipes had scores of 67 and 68 for a nine-under par total of 135 to share top spot at Prince’s with Hertfordshire’s Euorpean Tour player Callum Shinkwin – the pair finished one ahead of Canadian Austin Connelly.

Three birdies in a row to end the front nine in the afternoon put 18-year-old Knipes – who has already played a top amateur event at Royal Portrush – into contention. Two more birdies at the 15th and 16th got the amateur to 10-under.

He dropped a shot at the short 17th before driving into a bunker at the last – but showed his nerve in getting up and down for a par from 100 yards.

Knipes, who helped Essex beat Hampshire in the South East League Final at Frilford Heath, in October, said: “I’m lost for words. It’s huge to get into The Open, the best competition in the world.

“I wasn’t that nervous, I had nothing to lose. It didn’t feel any different from normal but a few putts started dropping but I must think my caddie, without him I would not have got in.

“I played at Royal Portrush last year in the Boys Amateur and got to the last 16. It’s unreal, so tough but spectacular,” said the Essex ace, who played on the MENA Tour in the Middle East earlier this year to gain more experience as he prepares to eventually turn pro.

Twenty-six-year-old Shinkwin, who was runner-up at the Aberdeen Standard Investments Scottish Open two years ago, had planned to spend the day playing with friends at Royal St George’s.

But he was glad he remembered he was due to play next door as he qualified for his third Open. After an opening 70, he birdied five of the first seven holes in the afternoon on the way to a best-of-the-day 65.

Shinkwin, who lost out to Spaniard Rafa Cabrera-Bello in Scotland, in 2017, said: “I was going to play with some mates at Royal St George’s today so I’m glad I remembered I was due to play here.

“It’s great to get back in The Open. I’ve had two poor experiences when I’ve missed the cut but hopefully this time I’ll perform well.

“I had to save par on 16 and 17 and then had a 15-footer at the last and knew birdie would guarantee a spot so it was great when it went in.”

Connelly, 22, got through a play-off two years ago at nearby Royal Cinque Ports before finishing 14th at Royal Birkdale on his debut in The Open.

An eagle at the 15th, his sixth, with a hybrid hit from 208 yards into the wind to a foot, set up an afternoon 66, which also included four birdies in a row on his second nine.

Connelly thought a dropped shot at his last hole would mean a play-off again – but he sneaked through by a shot as Ryder Cup veteran David Howell missed out.

Connelly said: “I’m extremely relieved to avoid a play-off despite a bogey at the last. Today was my best ball-striking of the year and I knew the putts would start to fall eventually as they did with that run of birdies.

“The Open is unlike anything else in golf, the chills walking down the 18th fairway with the grandstands were amazing. I’ve waited two years to get back there and now I have.”

American Julian Suri, a winner on the European Tour in 2017, had led after the first round with a 66, but was left one short after a 71 with his putt at the last just shaving the edge of the hole.

Howell – who came close to being crowned European No. 1 in 2006 after his win in the BMW PGA Championship at Wentworth – also missed out on a play-off by one stroke after three-putting the 18th in a 68.