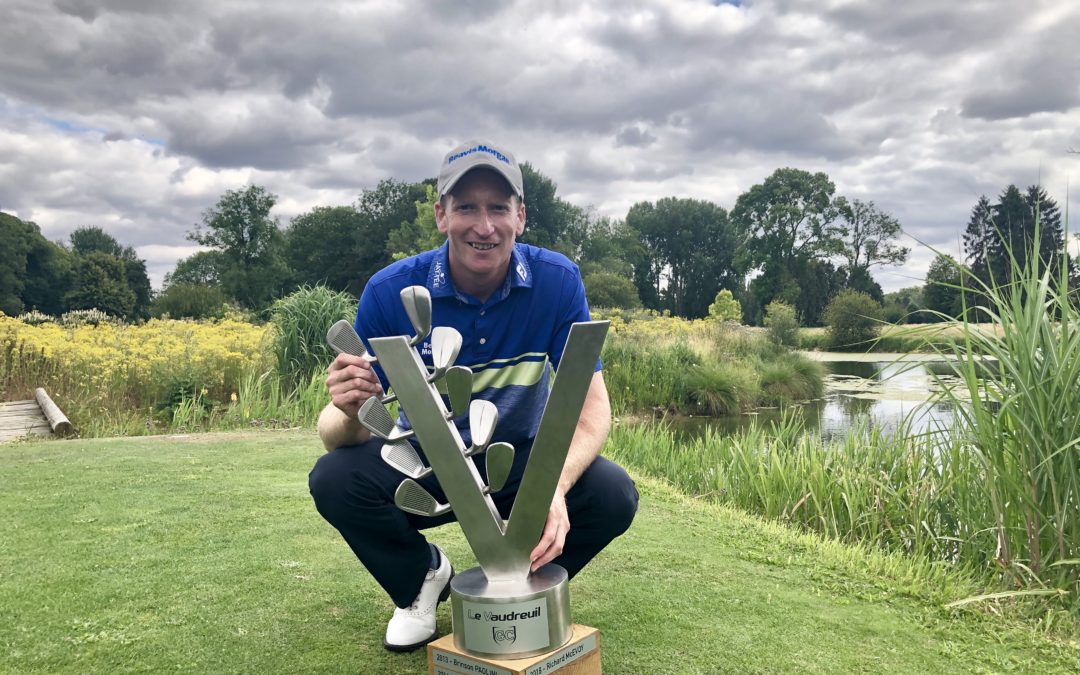 But 12 months later the former Georgia State University golfer went one better – recording a final one-over par round of 72, for an 11-under par total that sealed a maiden victory by just a shot.

After opening rounds of 64-68-69, the 36-year-old, who lives in Canterbury, held off the challenge from Hampshire veteran Richard Bland to become the third successive Englishman to lift the trophy at Golf PGA France du Vaudreuil, following in the footsteps of Essex’s McEvoy and Aaron Rai.

Tiley, who played for England as an amateur in 2004 and 2005, said: “It sounds fantastic. I came close last year and finished runner-up to my good friend Maccas, so it was nice to seal the deal this year.

“I was feeling nervous on the first tee. I’d slept on the lead for the last two nights, and that is always hard because you wake up thinking about the different scenarios.

“It’s a tough tee shot on the first hole and I didn’t want to put myself in the bunker or up the lip of it.

“It was a nervous start and I was pretty nervous all day, but I slowly got into the round, playing a few holes without nerves helped a lot,” added the Royal Cinque Ports member.

Tiley’s final round featured four bogeys alongside three birdies as he clinched the victory. However, it was his short game which helped him claim a memorable triumph at a favourable venue.

“I think I only missed five putts inside 10 feet all week, so I holed out really well, which was great,” said Tiley, who beat the likes of fellow future European Tour players Steve Lewton, from Woburn and Surrey’s Ross McGowan to land the South East Schools Championship in 2001 at Welwyn Garden City, the Hertfordshire club where Sir Nick Faldo learned to play the game.

Tiley said: “There were a lot of key saves, but the birdie on 10 was pretty good and that helped me take charge a little bit.

“Early in the round the chip on the eighth was good and that steadied the ship.

“The greens are so small that if you miss them you end up in the rough, which is very difficult, because sometimes the ball will fly and sometimes it’ll end up short. But I played that chip nicely and holed the five-foot putt.”

Earlier in the tournament, Tiley had raced out of the blocks with seven birdies – incluidng five in his first eight holes – in his first round to join Frenchman Robin Sciot-Siegrist at the top of the leaderboard.

Tiley, who had fellow Kent pro Matt Ford in the chasing pack until he faded to finish sixth after a 73, admitted: “It’s been quite a struggle so far this year, so it was nice to come here and start like that.

“If you can limit your mistakes in this game that always helps, so that helped in making a good start.

“I think this course suits my game. I was hitting the ball relatively straight and keeping it in play, and because of that you get a lot of wedge shots, and I’m pretty useful with a wedge in my hand.

“I’ve been practising a little bit more on my strengths within my game and that has shown.”

Bland, whose only Tour win came in the Challenge Tour Grand Final back in 2001, recorded a three-under par 68 to finish runner-up to Tiley, while home favourite Grégory Havret – aiming to become the first French winner of the event – finished a further stroke back in third place on nine-under.

Tiley’s best finish of the season before France had been a share of 45th place in his very first event of the year in the Magical Kenya Open, on the European Tour, which earned him €5,390.

Now he has every chance to earn a full card with 13 more events to compete in before the season’s climax for the top 45 players competing in the 2019 Grand Final.

The top 15 in the European Challenge Tour Order of Merit after the Grand Final, in November, will earn a full card on the European Tour in 2020.

With his win, Tiley jumped up the season-long Challenge Tour Rankings from 126th to 11th, while Bland – who lost his card last season after finishing 163rd on the Race to Dubai – returns to second position.

Bland, who has played 450 times on the Euorpean Tour and sits third in the all-time list of players to have played the most events without a victory with Ross Drummond (490) and David Drysdale (451)

Meanwhile Havret – who finsished runner-up to Graeme McDowell in the 2010 US Open at Pebble Beach, jumped to eighth place from 25th.