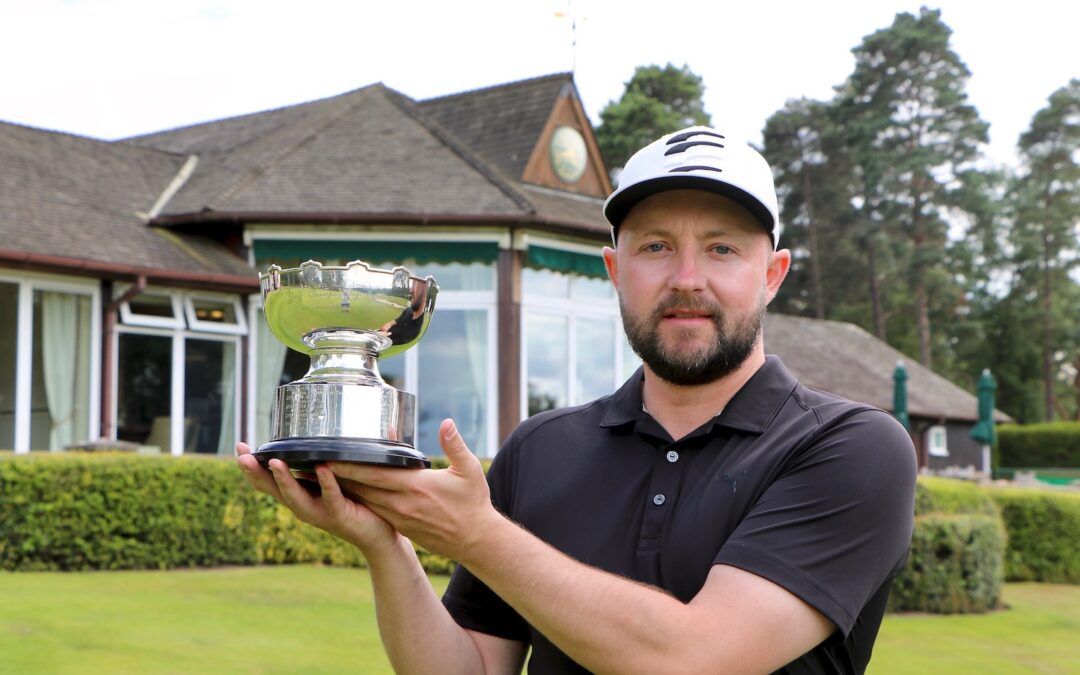 TEST Valley’s new Logan Trophy winner Stuart Archibald admitted he was set to throw in the towel and walk-in with five holes to play – after a horror slip on the tee left him in agonising back pain.

The 38-year-old former EuroPro Tour winner lost his footing hitting his driver on the uphill 14th during the final round of the English Mid-Amateur Championship, at Liphook Golf Club, on Sunday.

The lower-back injury, that has caused him so many problems throughout his career, had already flared on the first day of the 54-hole tournament, which he had led thanks to a fine three-under par 68.

He defied the pain to walk up to the green and then holed a 50-foot putt for the most unlikely birdie after mis-hitting his approach.

Young dropped a shot on the same hole a few minutes later to leave the former county team-mates tied on one-over par.

Archibald somehow played the last four holes without dropping a shot despite the pain to force a three-way play-off with Young and Durham’s Michael Henson, who had already posted one-over.

And when Archibald gingerly stepped back on to the first tee, he was the only one to find the putting surface on the tricky par-three, and a long, lag putt from the back, left him with a two-footer for victory.

It meant Archibald became the third Hampshire player to win the Logan Trophy for the Over-35s, joining Young and Stoneham’s three-time winner Alan Mew, the current England Seniors captain, who played on both the European Tour in the 1970s and enjoyed several seasons on the Seniors Tour, after a very successful spell in the amateur ranks in the 1980s and 1990s.

But a double bogey at the par-three 12th had looked to have cost Archibald any hope of catching leader Martin Young, the former Hampshire captain, who was looking to lift his second Logan Trophy, after winning the English Mid-Amateur at Hayling GC in 2006 – just two weeks after Archibald had won the Hampshire, Isle of Wight and Channel Islands Amateur Championship at the same course. 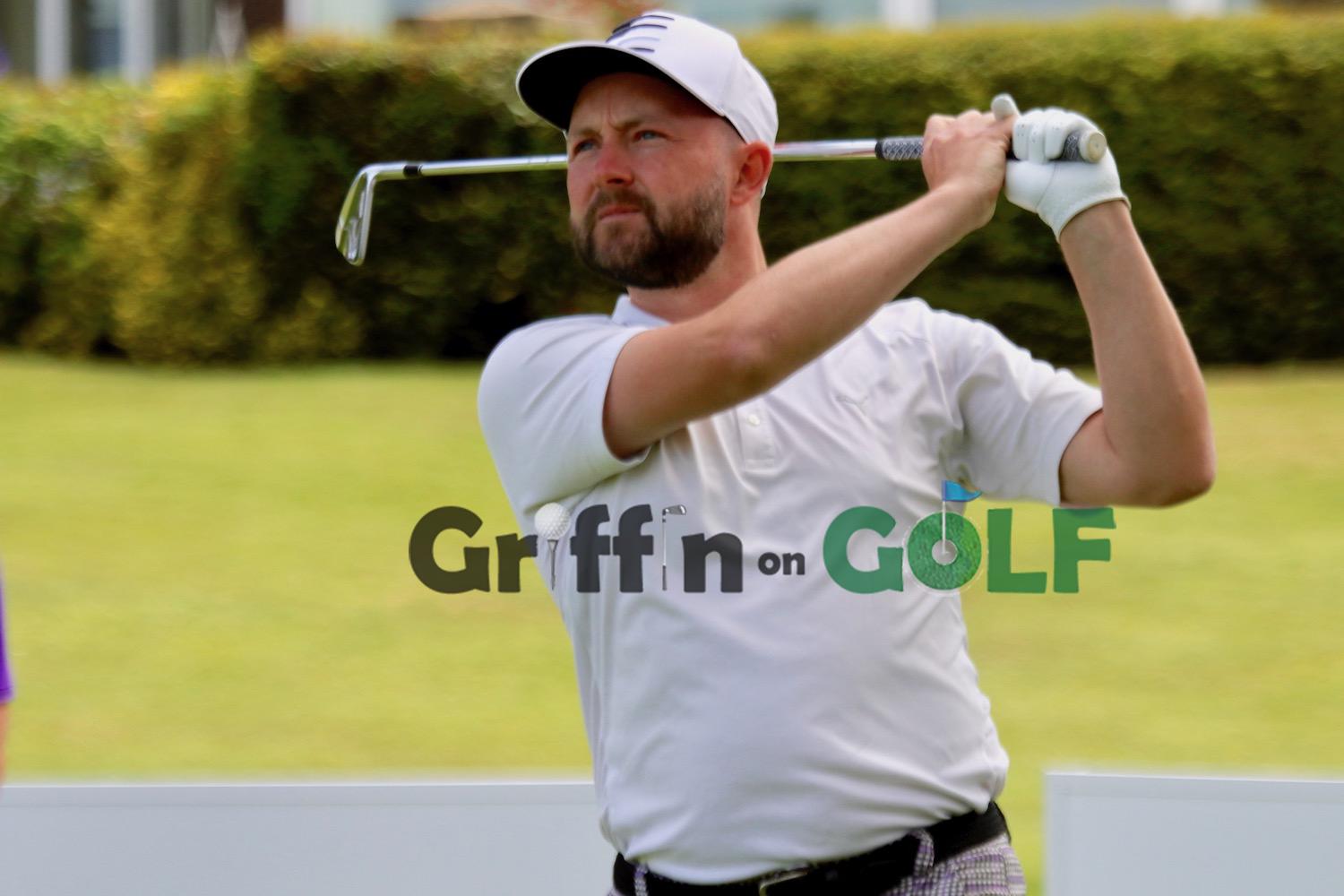 Stuart Archibald had to limp over the last five holes after hurting his back for a second time in the championship. Picture by ANDREW GRIFFIN / AMG PICTURES

Young was on level-par playing two holes behind Archibald when the six took the Basingstoke golfer to three-over par – although he bounced back with a birdie on the 13th, before disaster appeared to strike.

After a couple of minutes stretching out his back by lying down on the tee where his foot had slipped, Stuart could barely get to his feet.

He struggled to walk up the 434-yard hole. His drive had only just run through the fairway despite the loss of his footing, but the second shot was almost the parting one.

Stuart explained: “I barely made a swing and duffed my wedge through the bowl to the back of the green. I told my caddy Phil, I was really struggling to carry on. 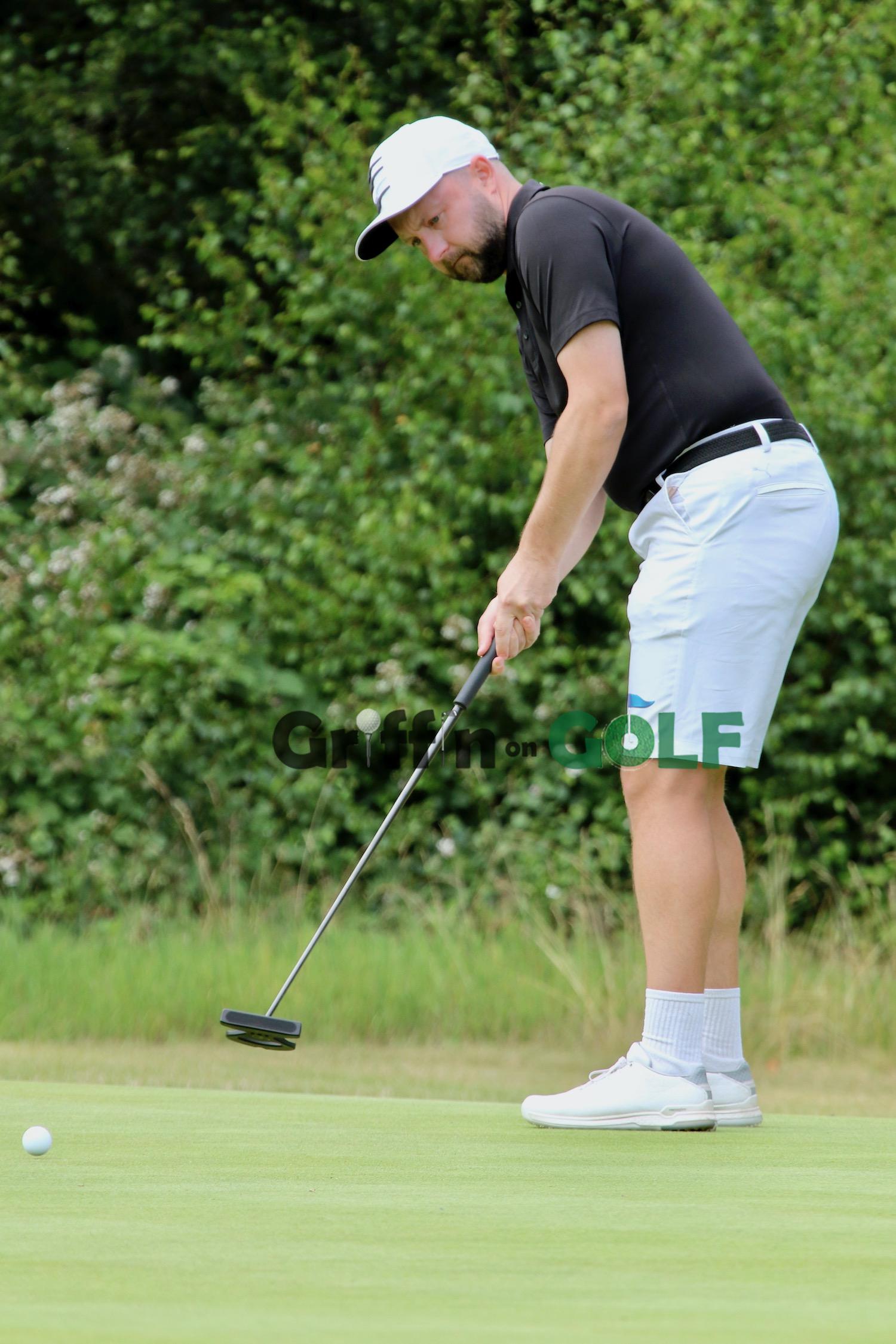 Archibald putts from 20 feet on the first green in the first extra-hole of the play-off for the Logan Trophy. Picture by ANDREW GRIFFIN / AMG PICTURES

“Phil had been reading my putts all-day to save my bending down all the time but I told him I was not interested on 14, I could barely stand there to hit it.

“Somehow, without me really looking at the line, the ball went in from about 45-50 feet. Phil said to me, ‘You are one-over now, can we just play one hole at a time and see if we can get in, and see where we stand.’

“I remember being told when I was younger that if you are really struggling, to hit the shot and walk after it – Gary Player-style – and it worked.

“I hit some good shots coming in and when we got to 17 and saw the scoreboard, I still had a chance. I missed my birdie on the 18th, but five was enough for a play-off.”

Young, who had gone into the final round tied with Woburn’s three-time British Mid-Amateur Champion John Kemp.

But bogeys on the 10th – where Kemp racked up an ugly quadruple bogey eight after losing his ball and getting under the lip of a greenside bunker with his fourth shot – hurt Young’s hopes.

The three-time Hampshire, IoW & CI Amateur Champion, who led the county to the English County Championship five years ago – could not capitalise on the short par-four 15th. or the downhill 16th.

And after a great up-and-down from the off the green at the par-three 17th, his birdie putt from some six feet on the last missed on the right.

Henson, from Darlington’s Rockliffe Hall, who had a share of second in the English Mid-Am 12 months earlier at Thorpeness, in Suffolk, had come home with a final round 68 to match the Hampshire pair’s score.

Yorkshire’s Steve Uzzell – winner of the Brabazon Trophy in 2008 – fell just short in his bid to add the Logan Trophy to the English Amateur Strokeplay title as he carded 68 and a best-of-the-week 66 on Sunday, after a 10-over par 81 on Friday. 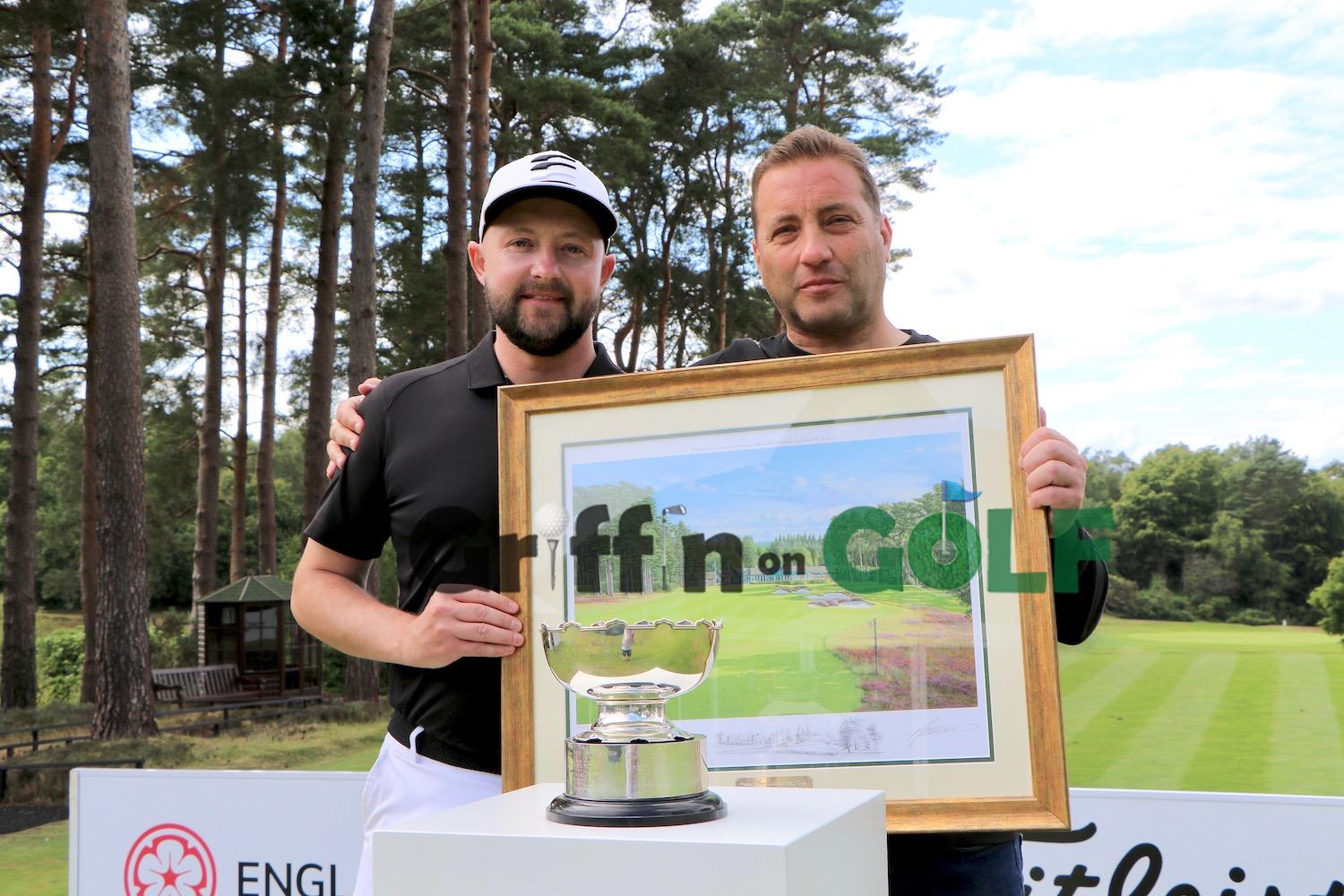 Liphook GC head greenkeeper David Murdoch with Test Valley’s Stuart Archibald (left) with the Logan Trophy and a limited edition print of the 18th hole after his play-off win in the English Mid-Amateur Championship. Picture by ANDREW GRIFFIN / AMG PICTURES

After the top two, Rowlands Castle’s former county captain Colin Roope ended in 10th, having been in fourth place on two-over when he lost his ball on the 14th, dropping four shots over the last five holes to end up on six-over, two shots better than Stoneham’s Ryan Henley, in 12th place.

But it was Archibald’s day as he lifted the trophy and was presented with a limited edition painting of the 18th hole at Liphook by club captain Nigel Lees.

Stuart said: “I love playing at Liphook and everyone in Hampshire knows the superfast greens are the jewel in the county’s crown.

“It’s always presented in fantastic fashion by the head greenkeeper Dave Murdoch and his team. We get to play it regularly and fantastically well-run events like this one by England Golf let other golfers get to see what we enjoy regularly.

“And luckily the one thing I know about playing Liphook, is you have to just it put it on the green on the first – it’s always a tricky two-putt even if you find the green. But if you miss it, it’s an impossible up-and-down.

“I was the only one to hit the green and I managed to have one of the easier long putts and got it close enough. I didn’t fancy another hole.”

For Young, who has won Liphook’s Pearson Trophy in the East Hampshire club’s own Mid-Am open three times since 2005, it was a case of what might have been, having also finished in second place when Brokenhurst Manor hosted the Logan in 2016, when a double bogey at the last cost him the title by one. 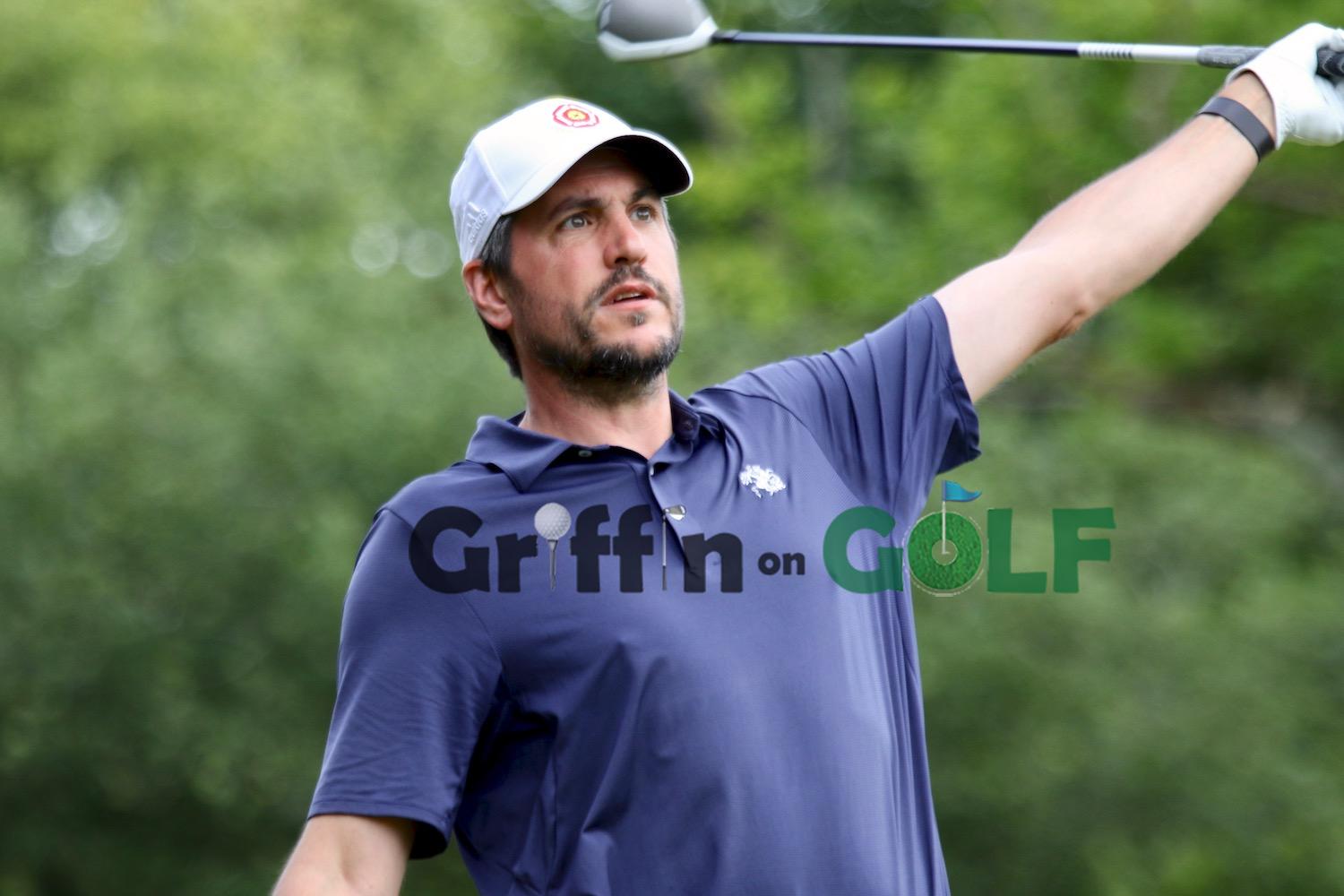 Brokenhurst Manor’s Martin Young misses the fairway on the 10th tee during the final round of the Logan Trophy. Picture by ANDREW GRIFFIN / AMG PICTURES