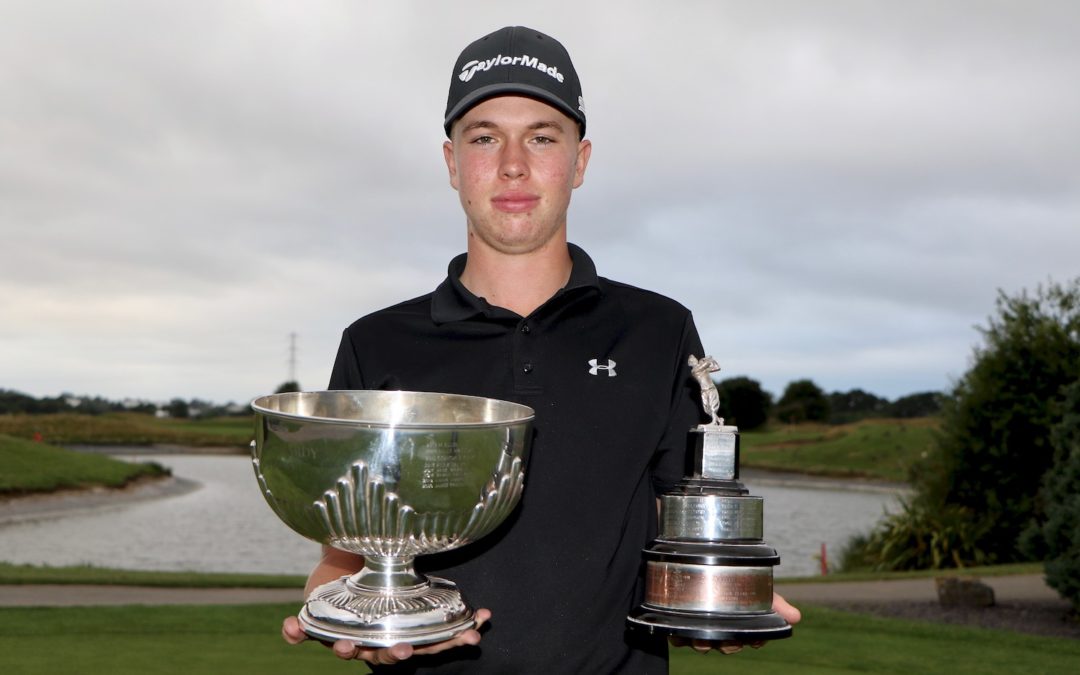 CHARLIE Forster became the fifth North Hants player to claim the Hampshire Junior Championship in 71 years – even though he admitted playing way below his best.

The phrase in football is winning ugly – Charlie’s MFC Popley team won the Hampshire U16s Cup before he took up golf seriously just two years ago, so he is familiar with the phrase.

And “less than pretty” rounds of 69 and 71 were enough to give him a two-shot victory over Stoneham’s Drew McKinnon at Cams Hall GC.

Charlie, who joins US Open winner Justin Rose among the winners names on the trophy, said: “I thought the course was very scoreable but obviously there were a lot of people over par.

“I just didn’t have my best golf today – far from it. But then again I have played a lot of golf over the last two months, so I guess you can’t always turn up and play great.”

Forster, who was crowned South West Schools Champion in early June, revealed just how high the standards he is setting himself this season.

The plus-three handicapper said: “At the start of the day, England announced their team for the Boys Home Internationals in August.

“I was hoping that I might get selected. My results have been very consistent this summer – my worst finish has been 12th – and the England selectors were watching me at the Carris.

“I finished 12th at the Carris last week – at one point I was right in the mix – just three shots behind the leader in the third round.”

Forster, who made the last 16 at the Hampshire, Isle of Wight and Channel Islands Amateur Championship for the first time when his home club hosted the matchplay in June, was hoping to gate-crash the England U18s squad, having been a member of the South East Region training squad for the past two years, working with Tournerbury GC pro Kev Flynn.

Forster has also played in four events on the Clutch Pro Tour as an amateur, gaining valuable experience playing on the mini-tour which has featured a number of European Tour players during the COVID crisis.

Charlie finished as the leading amateur in two of them. That experience certainly stood him in good stead as he closed out his first U18s county crown.

He picked up the John Hardy Bowl for the leading player in his age group, as well as the Pechell Trophy as the overall winner.

Forster may not have rated his golf as his best, but he still produced a run of five birdies in six holes, starting from the 12th in his first round.

Having made three bogeys in his first 11 holes, it was a spark that was needed to light his title charge. The 18-year-old, who started playing at Basingstoke GC before moving to North Hants, carded a two-under par 69 before lunch. 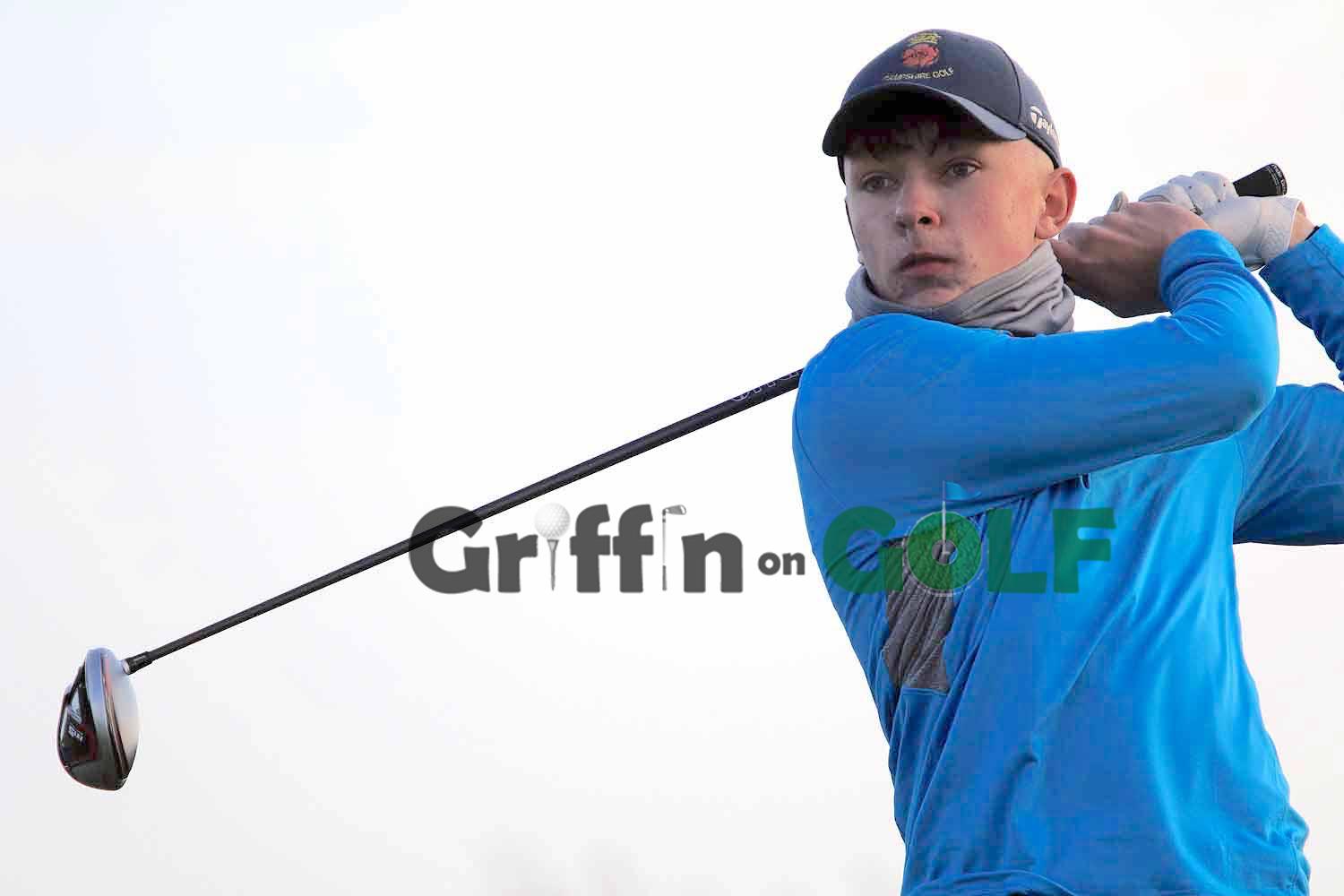 Stoneham’s Drew McKinnon was the only other player under par in the Hampshire Junior Championship. Picture by ANDREW GRIFFIN / AMG PICTURES

That left the A-level student from Winchester’s Peter Symonds College with a two-shot lead over Hampshire Boys team-mate McKinnon, who was the only other player in the 33-strong field to shoot par or better.

Forster’s second round proved up and down as an eagle at the 505-yard sixth took him to four-under. But a triple-bogey seven at the eighth after he lost his ball off the tee wiped out the eagle as McKinnon moved level briefly after picking up two shots on his front nine.

Forster bounced back with a birdie three at the 10th to move back in front. He bounced back again from a bogey at the 12th by getting up-and-down from left of the greenside bunker after having a crack off the 13th tee.

McKinnon had briefly shared the lead until his bogey at the 13th, followed by a double bogey six at the 14th. That left some of the nearby blue waters of Portsmouth Harbour between the two teenagers.

However, the Southampton golfer was not quite finished and picked up back-to-back birdie fours at the 15th and 16th – only to drop a shot at the 17th playing in the group ahead of the leader.

A four at the penultimate hole left Forster one ahead as McKinnon made four down the last. The leader then hit a wedge a foot past the 18th hole and watched the ball check and land six inches from the pin, as his kick-in birdie rounded out his victory in style.

Charlie said: “I didn’t really know what Drew had shot in the afternoon – but I remembered he shot four-under in the final round at Sherfield Oaks last year.

“I didn’t birdie the easier par five 15th in either round, so I thought I had given a couple of shots to the field. I had a few problems because I snapped my three-iron in the Carris last week, and my four-iron was misbehaving a little.

“So I had to hit a few hard five-irons which left me a bit too far back on some holes – having taken an seven on eight I was trying not to take too many risks. After I bogeyed the 17th I thought I would need to birdie the last to have any chance of winning, so it was nice to hit it that close on 18.”

ROWLANDS Castle’s James Plater, who plays off six, took the Hampshire U16 title, shooting rounds of 75 and 77, finishing in sixth overall, on 10-over par.

Hockley’s Tom Chalk, who was looking to add the U18 title to the U14 crown he won three years ago, finished third overall on four-over.

The South East Junior Champion carded rounds of 72 and 74 with two double bogeys in his second round stalling a late charge.

Hampshire Boys captain Nick Matthews, from Meon Valley G&CC, was a further shot back in fifth. 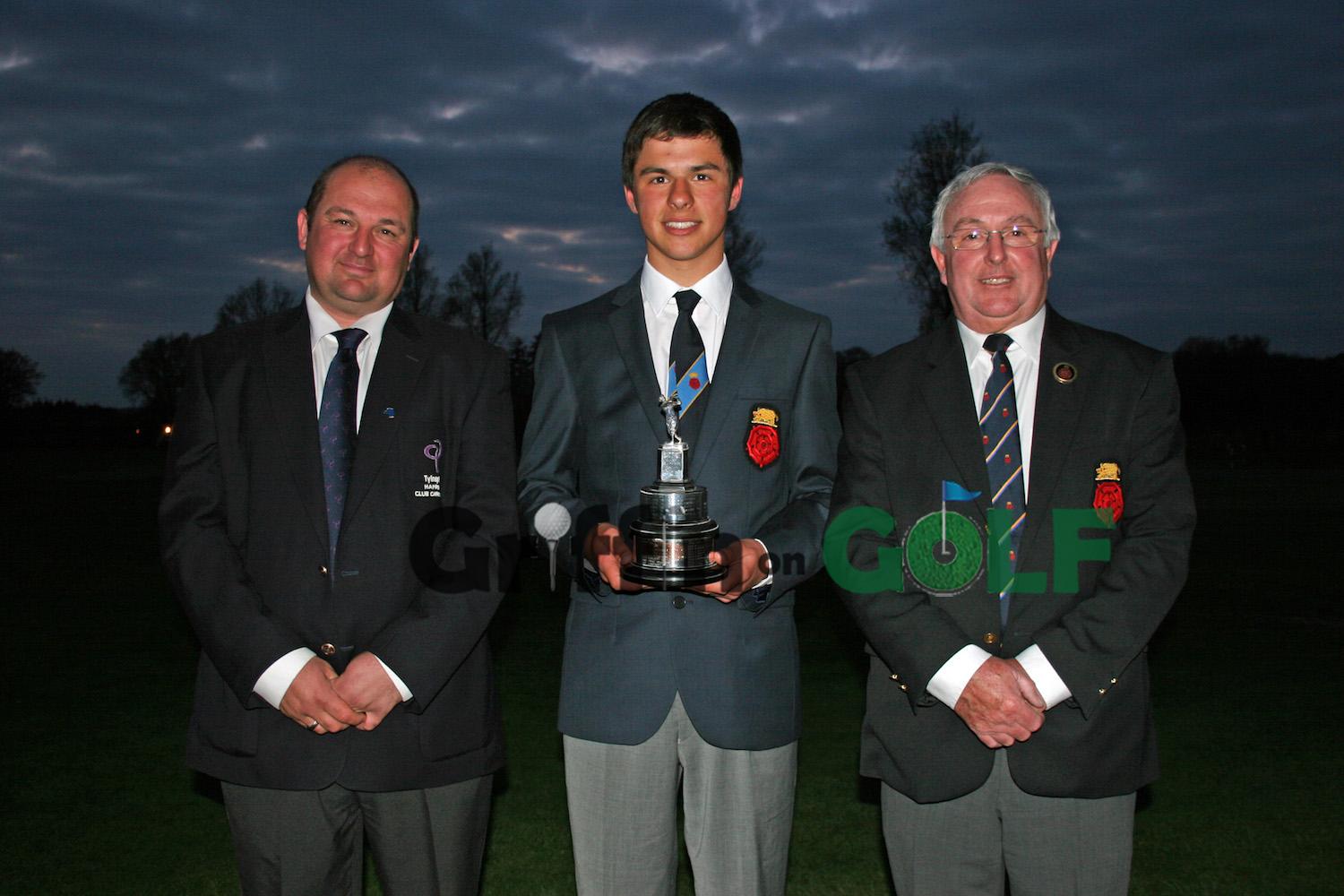 Brokenhurst Manor’s Jordan Ainley – the only player to win the Hampshire, Isle of Wight and Channel Islands Amateur Championship and the county junior championship in the same season. Picture by ANDREW GRIFFIN / AMG PICTURES

BROKENHURST Manor’s Jordan Ainley is the only player to win both Hampshire’s junior and men’s titles in the same season since the U18s event started in 1951.

He pulled off the double in 2012 by winning the Sloane-Stanley at Shanklin & Sandown GC, having claimed the junior championship at Tylney Park – denying Jack Singh-Brar back-to-back victories.

The likes of David Harrison, Kevin Weeks, Justin Rose, David Porter Jack Singh-Brar and Harry Ellis have gone on to win even bigger prizes in the amateur game after claiming the Hampshire Boys trophy – and Forster will be keen to do the same.

Thirteen players have gone on to land the Sloane-Stanley Challenge by winning the men’s county championship after claiming the junior title.