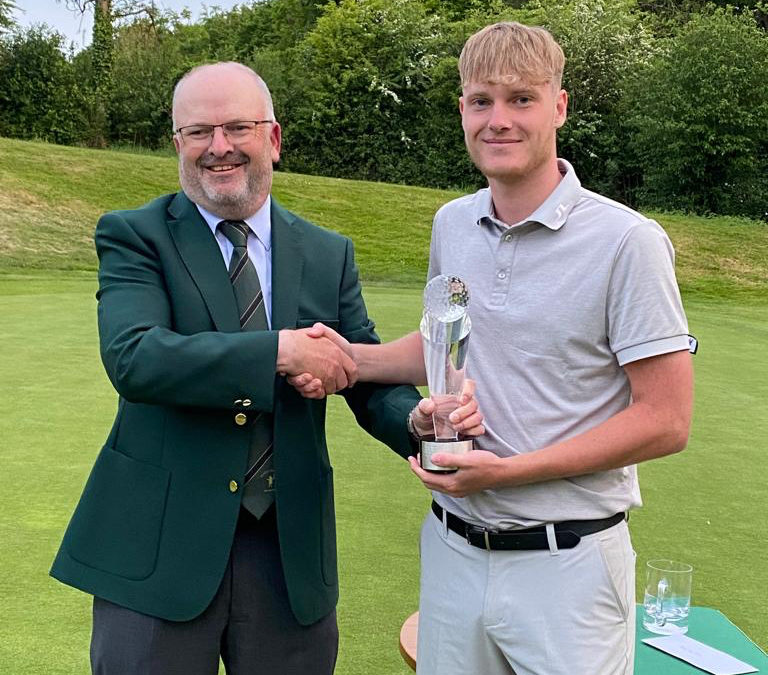 And the two-time Hampshire Junior Champion had to fend off former England U16 international George Saunders and Hockley’s South East Junior Champion Tom Chalk, beating them in a play-off, which went to two extra holes.

Freeman (pictured above with Hockley captain Alan Carpenter), is in the second of year of the PGA golf degree at the University of Birmingham. He drained a 12-foot birdie putt on the second to become the fifth Stoneham player to land the Delhi in its 47-year history.

Saunders, who escaped with a par at the first having tangled with the trees off the tee, which forced him to hack it out before chipping to inside three feet, was favourite to add to his victory in 2016, when he was thought to the youngest-ever winner at just 16.

But having experienced two frustrating years on the sidelines at University of Tennessee after two stellar years in junior college golf had seen him ranked third in the USA in 2019, Saunders produced a loose shot with a wedge on the 434-yard second, which landed 35 feet from the pin.

Chalk had gone long and left, effectively taking him out of the hole, as Freeman showed his steel by sinking the putt after an excellent approach. 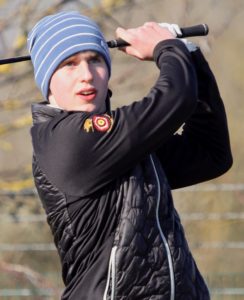 Tom Chalk who lost in a play-off for the Delhi Cup. Picture by ANDREW GRIFFIN / AMG PICTURES

Freeman had been in contention at the prestigious Selborne Salver last month, having been the lunchtime leader at Blackmoor GC, playing against some of the best amateurs in the country.

CHALK CHASED DOWN AFTER OPENING 66

As it was he came up a couple of shots shy as Hockley’s Luke Hodgetts became the first player from the Winchester club to land the Salver in its 47-year history, having been founded in the same year as the Delhi.

But on Saturday, Freeman had to chase Chalk, who opened up with a five-under par 66 – the best round of golf ever by the 18-year-old from Romsey.

Chalk admitted an early bogey had made him more defensive. But Freeman had to get rid of the taste of a bogey-bogey finish at the ninth and 10th over lunch, having started on the 11th.

Three birdies on his front nine, including 17 and 18, had got him to the turn in two-under, and a three at the seventh had him close to Chalk until those late dropped shots.

But with two past champions in Henley and Saunders in the mix, Freeman made the perfect start, negotiating the tricky first six holes going up Hockley’s hill, before making a three at the driveable par-four sixth, and grabbing another birdie at the next.

From three-under at the turn, Freeman piled on the pressure on his rivals with back-to-back birdies at the 303-yard 13th and the par-five 14th. Another birdie at the par-five last rounded off an excellent 66 with no dropped shots, and he took that hot finish into the play-off, making his 10th birdie of the day. 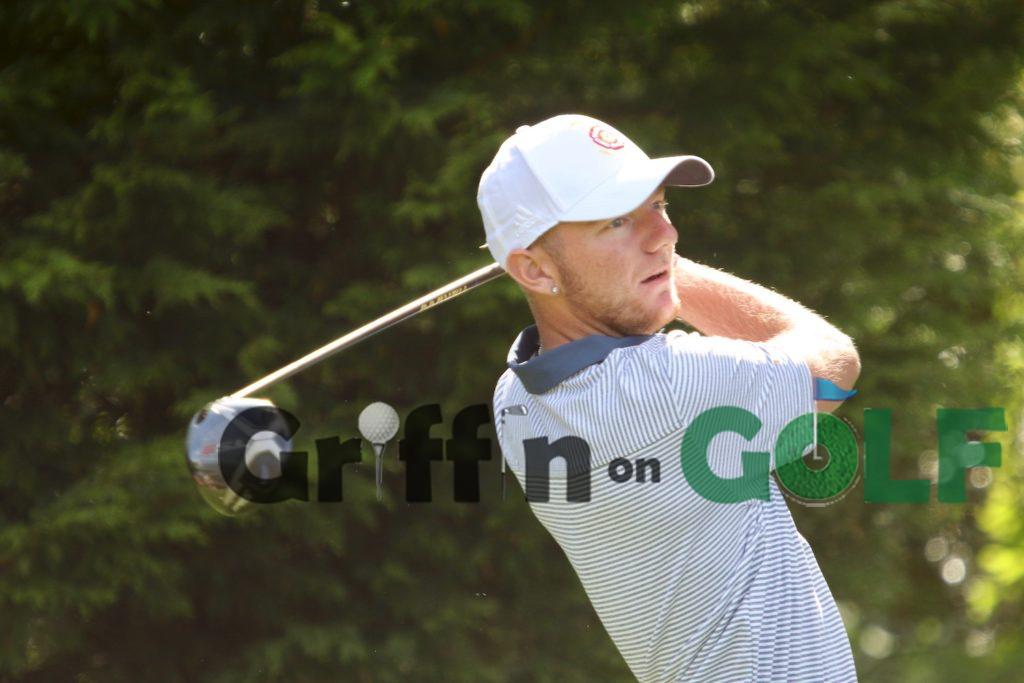 THE Stoneham ace’s first win in men’s golf – which earned James Freeman 15 Order of Merit points – should not surprise any regular county golf followers, or members at Stoneham.

Before his two wins in the Hampshire Junior Championship – just 10 other players have won it twice in its history – he claimed the U14 prize at Test Valley in 2016.

Having been a member of Hampshire’s South East U16 League winning side in 2018, and won the Faldo Series South Qualifier at Brocket Hall, in 2019, playing in the Grand Final in Abu Dhabi.

The England Golf’s South East U18 squad member in 2019 and 2020 also starred for Hartpury College winning the Association of Colleges Open at The Belfry’s PGA Course.

The latter has the all-time record with six victories – five of them in a row from 2009. This year, Henley, who has returned to the Hampshire first team after a six-year absence having started a family, had to settle for fourth place, having carded rounds of 71 and 68, three shots behind the winner.

TOOK UP GAME AT SOUTHAMPTON MUNICIPAL

Now Freeman, who took up the game with his dad Steve at the city’s municipal course when he was nine, will be licking his lips at the prospect of having a shy at the Hampshire, Isle of Wight and Channel Islands Amateur Championship.

Stoneham, the club he joined when he was 12, hosts the event for the first time in 14 years at the end of May.

The 36-hole qualifier on Friday will count as the second Order of Merit event of the year, with the top 16 progressing into the weekend matchplay, with the winner of Sunday’s final receiving the Sloane-Stanley Challenge Cup. 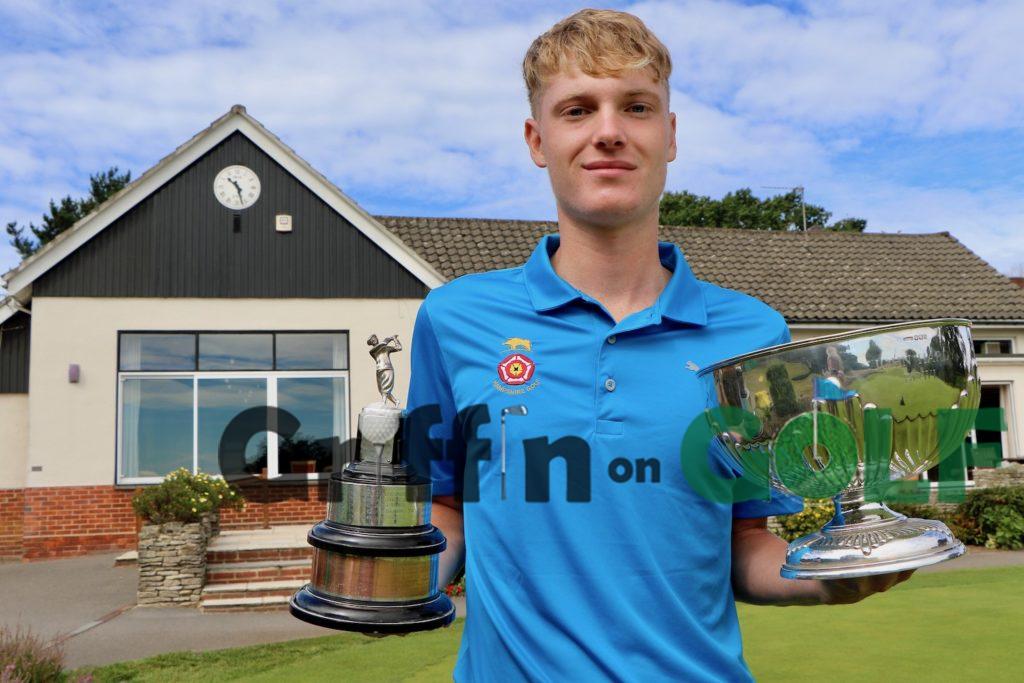